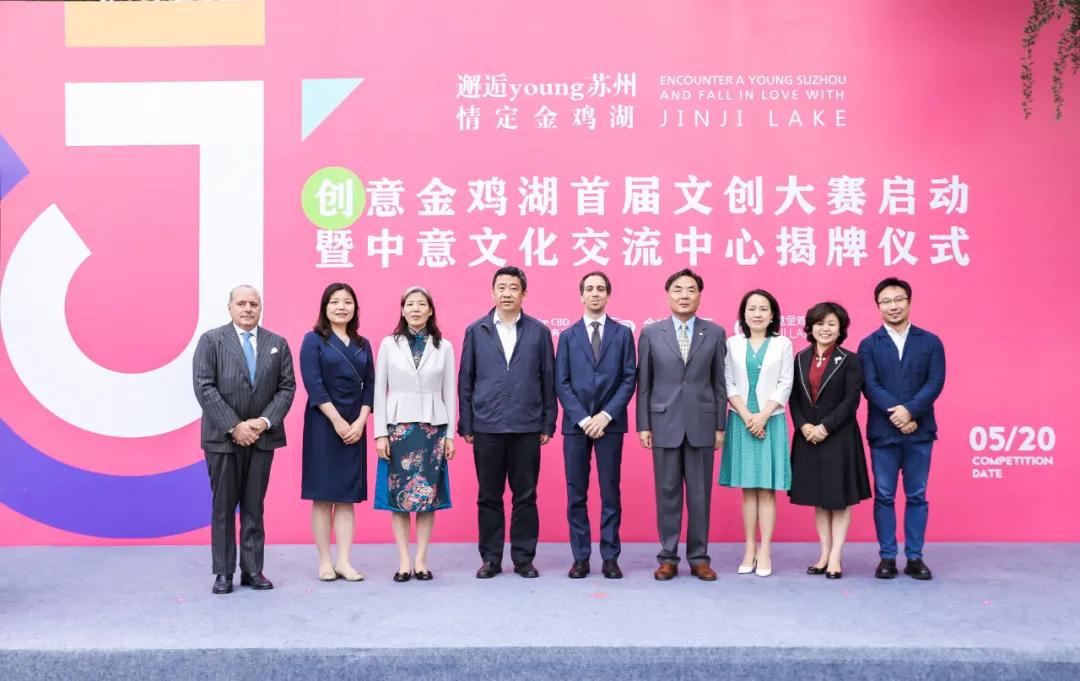 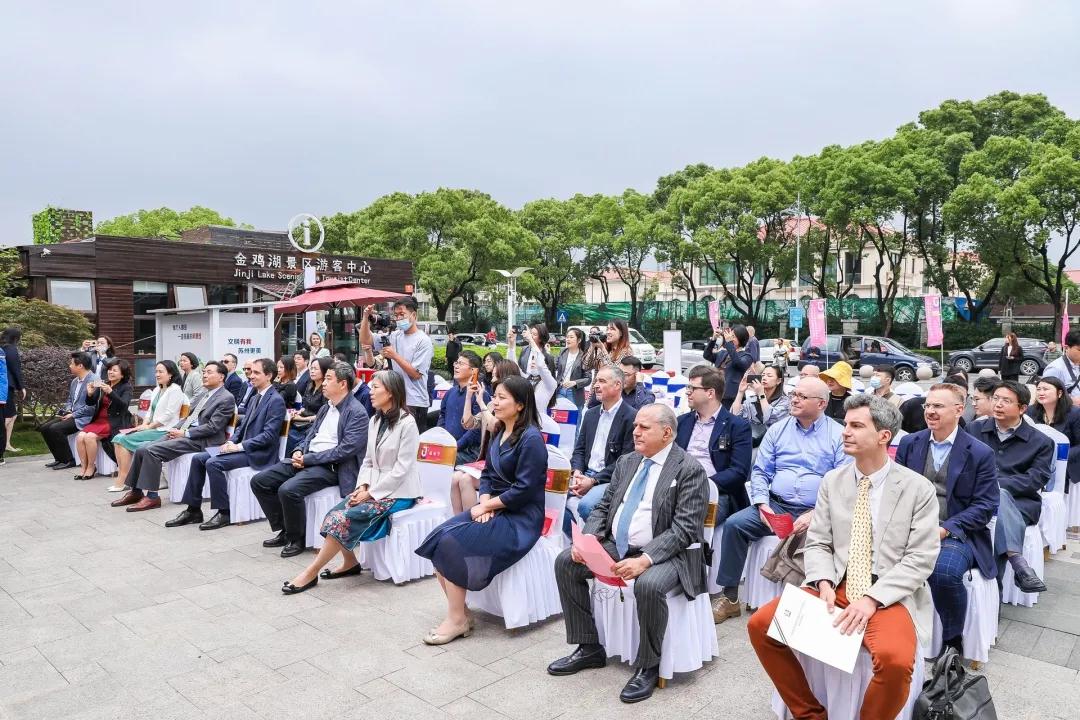 With a history of more than 2500 years, Suzhou has been enjoying the reputation of the “Oriental Venice” for a long time. In 1980, the two cities became sister cities, which promoted the exchanges between Suzhou and Venice to a new height. Jinji Lake scenic area is a national 5A tourist area. Besides, its fencelessness symbolizes its opening to the outside, making the scenic area one of the main attractions in SIP. Located at a site formerly known as an Italian restaurant with a good fame based on more than ten years’ successful operation, Left Bank Tourist Center of Jinji Lake Scenic Area was established in 2020 and it witnessed this inauguration ceremony of China-Italy Cultural Exchange Center. In the future, the center will keep up the cooperation with the Italian expatriates in Suzhou and facilitate cultural exchanges between China and Italy by hosting a wide variety of activities. Representatives from both sides exchanged cultural gifts at the ceremony. 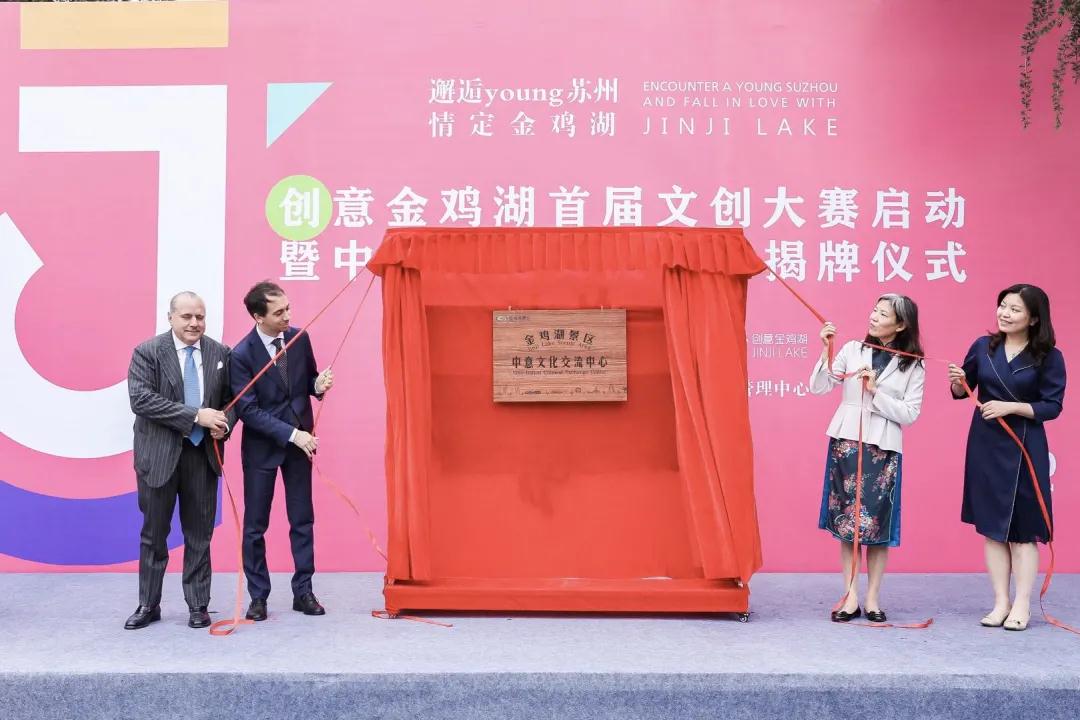 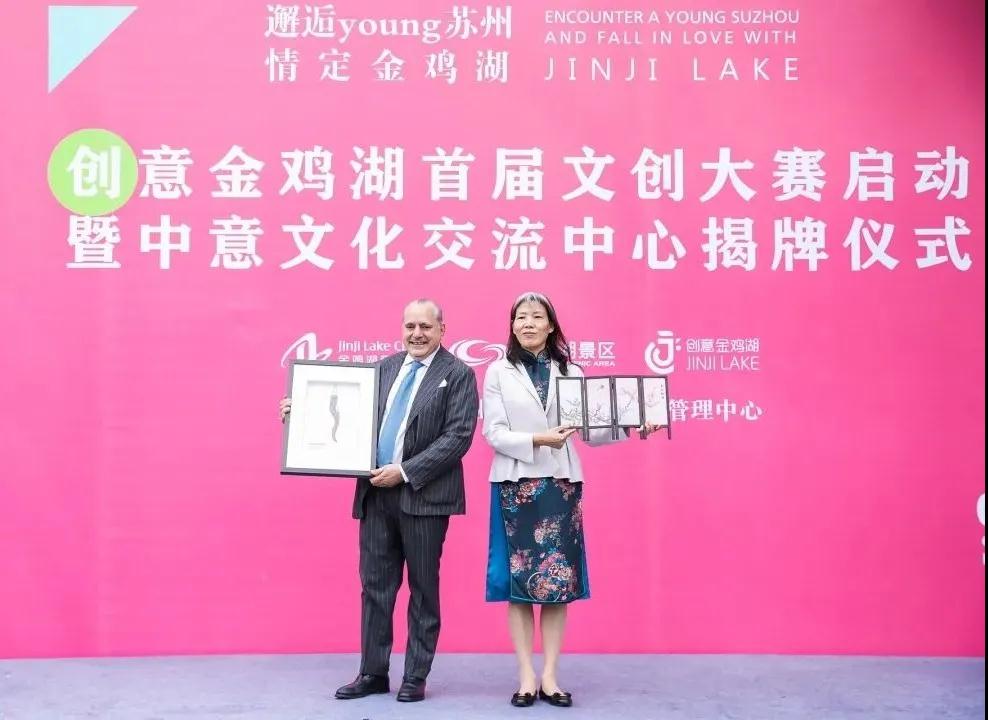 The tourist center, acclaimed as the “guest lounge” in Jinji Lake scenic area, serves as a platform where cultural enthusiasts can present performances and exchange ideas with the public. This year, it will host up to 20 cultural events, including Kunqu Opera Little Theatre, and lecture series on Italian art history. Besides, the on-going online and offline reading activities are very popular among teenagers. The “Sheng Dong Jinji Lake” Teenager Cultural Practice Camp launched on the same day will serve as the practice base for pupils of Suzhou Industrial Park Xingzhou Primary School and allow them to participate in the cultural development of Jinji Lake scenic area. 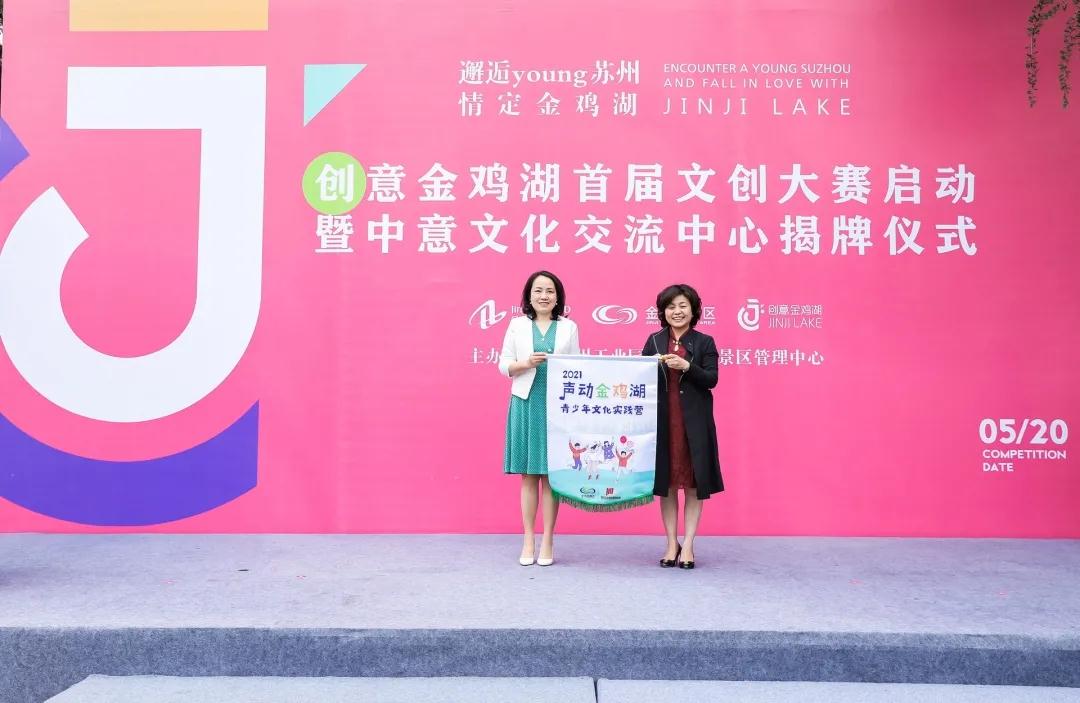 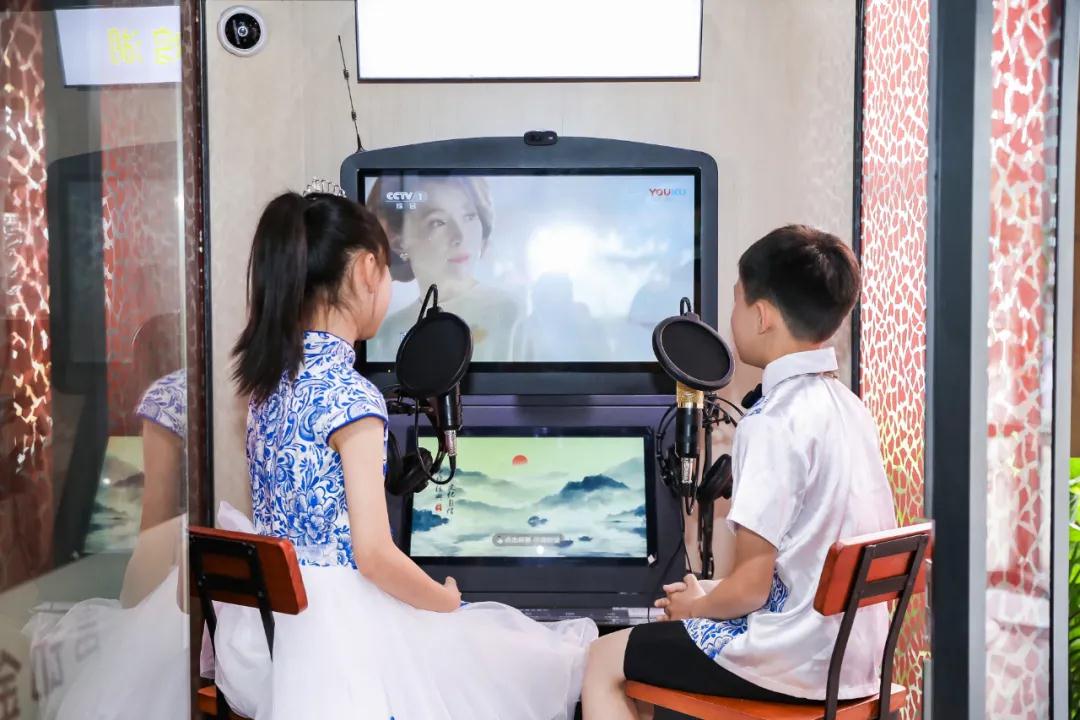 The leaders respectively representing Bureau of Culture, Radio, Television and Tourism of Suzhou, Culture and Tourism Bureau of Suzhou Industrial Park Administrative Committee, Jinji Lake Scenic Area Administration, jointly revealed the official logo for “Creative Jinji Lake” brand at the ceremony, signifying the First Creative Jinji Lake Cultural Design Competition was officially launched. The competition is designed to collect excellent cultural product designs with the characteristics of Jinji Lake from both domestic and overseas candidates. The period for collecting will last until the end of July with at least more than 200 pieces of work to go into this competition as expected. The results of the competition will be released later this year. At the launching ceremony, the representative of the jury remarked that creative products connote cultural meanings, therefore, the criteria “good product, culture, creativity” to reflect Jinji Lake’s traits and tourist resources would be adopted to assess the participating works. 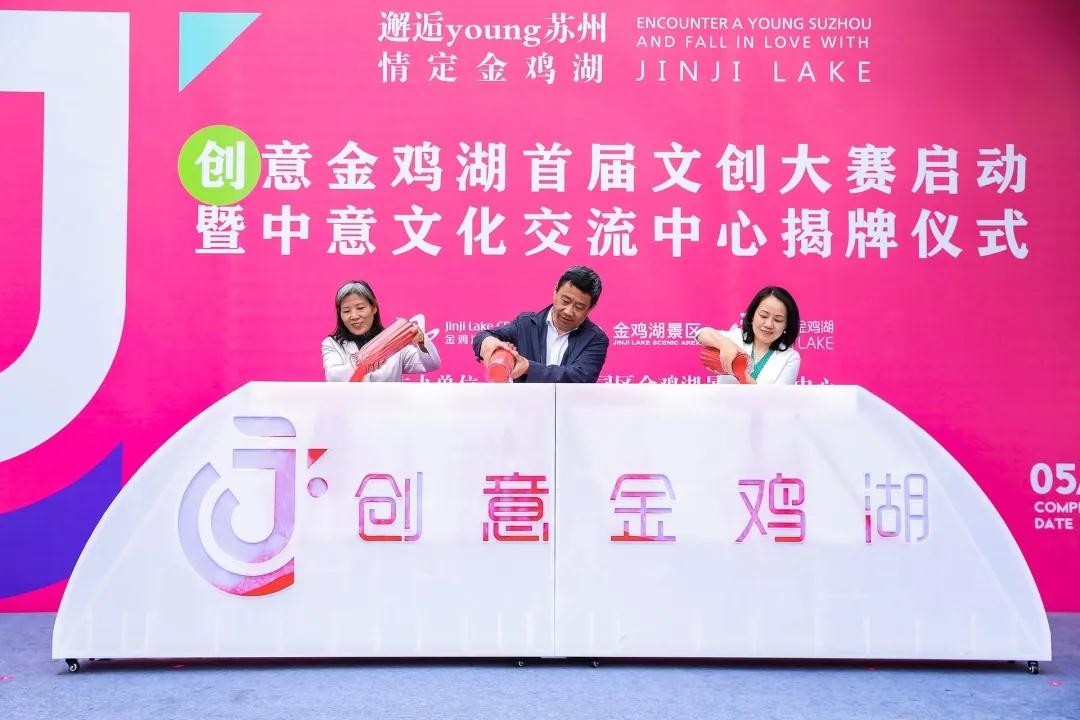 At this event, art performances were staged before the beginning of ceremony. The Little Sunflower Choir of Xingzhou Primary School composed of more than 40 students presented “The Earth Cantata”. Mr. Pietro Cassione from Italy brought the audiences his rendition of the classic Italian song “O Sole Mio”. The art performance culminated in Chinese new folk music performing.  After this event, more efforts will be made by us to boost the integrated development of culture and tourism in Jinji Lake scenic area, as well as the cultural exchanges between China and the rest of the world. We will try our best to make Jinji Lake more creative culturally and become a dynamic area in all aspects ! 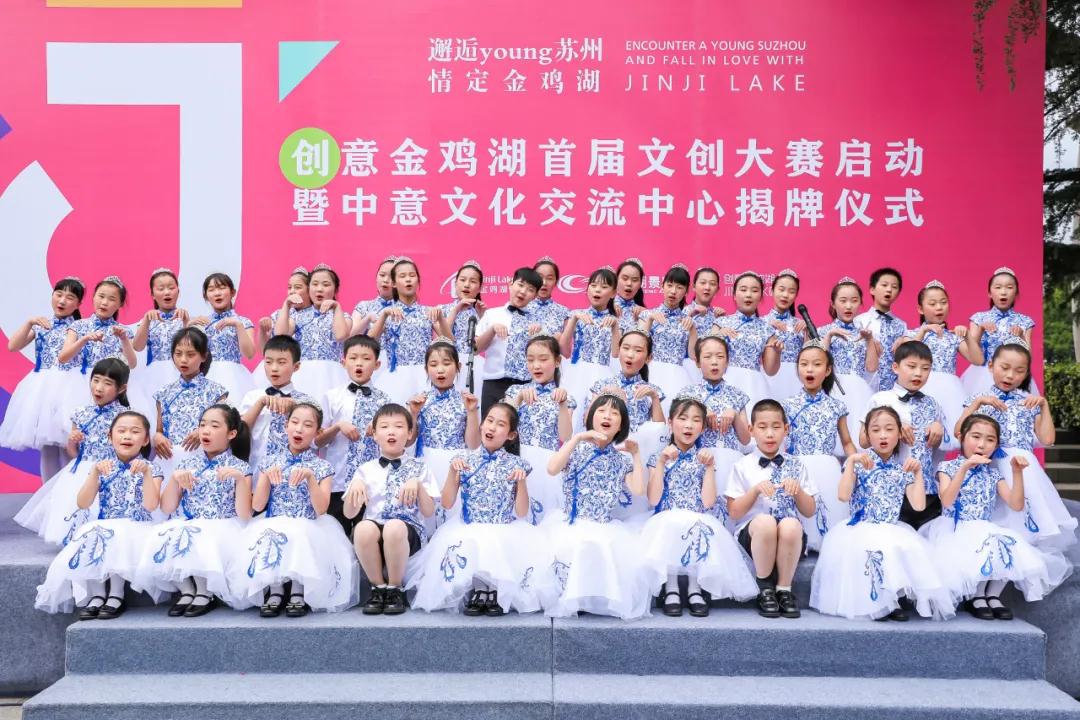 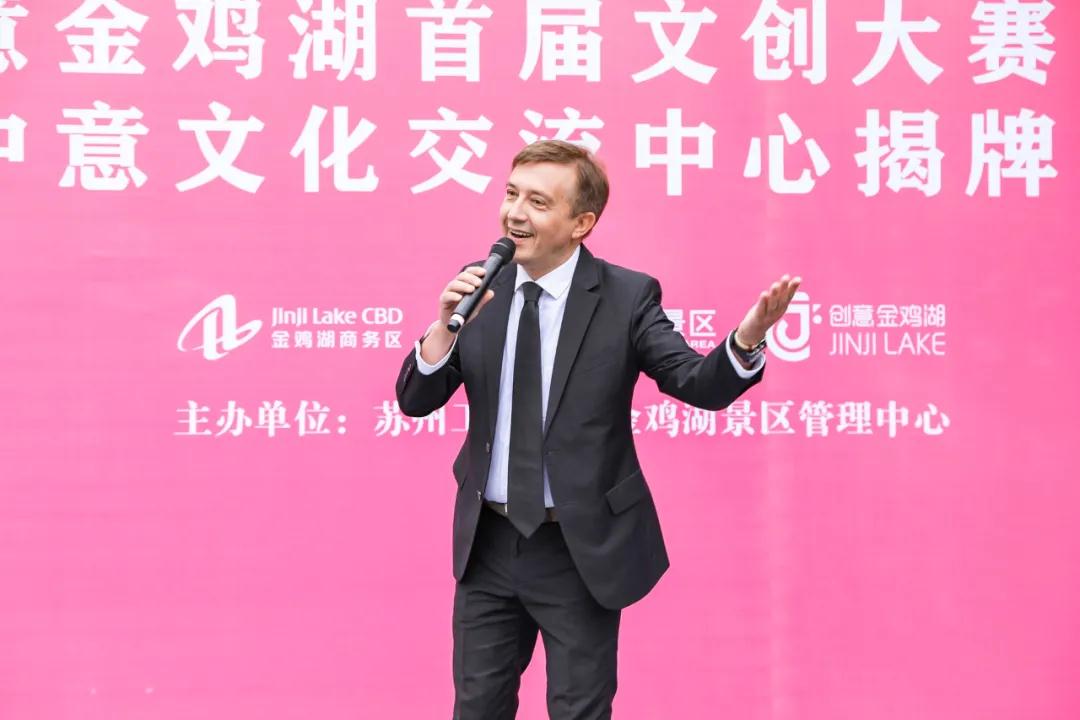